(Written in February, posted in November…there is no storm today!)

Yesterday, in great anticipation of Snowmageddon 2014, I studied in the library rather than my office. There is a beautiful view from the windows out to the water, and I perched myself facing outward so as to alert the campus upon the first flake’s appearance. I felt it my duty as the midwesterner in the building. The whole of North Carolina was out of sorts because of the impending storm. They were calling for inches. PLURAL. The last time we had this much snow I was 7 1/2 months pregnant with Zachary. This happens never. Or every 5 years. But mostly never.

I couldn’t keep my eyes off the birds.

A whole flock had descended on campus, apparently to ride out the storm. They were working so hard. They were flying from the ground to the trees in hasty, calculated, determined fashion. They did it for four straight hours, without stopping.

They were getting ready.

A less calculated flock was at Food Lion in Archdale. I was one of ‘those’ people, who, unlike the birds, had not gotten ready. There were lots of us. One poor man was wondering aimlessly about with a bag of bread in his hand looking helpless. He knew to get bread, but beyond that, he was lost. The cashier was nearly in tears explaining that she was just trying to ‘serve the customers’ and some of them had been so mean to her. Bless her heart. The manager was darting to and fro, sweating, and looking worriedly from the parking lot to the long lines and back to the parking lot. Bless his heart.

It’s not their fault we weren’t ready.

I had actually made a half-hearted attempt the day before. I went to Target, but only ended up with brownie mix and some Valentine’s candy. Hardly what was going to sustain the masses over the next three days.

Others were ready. The schools let out fully 24 hours before the first flake fell. READY. Businesses posted their quitting times online and on TV. READY. The local hardware store ordered extra sleds, which I purchased (the morning of the storm). READY (and business savvy). All 2 of North Carolina’s salt trucks had worked hard to get the roads covered. Bless ’em. READY.

The fullness of my under-preparedness didn’t occur until after my stop at the store. The snow accumulated so rapidly, that 20 minutes made all the difference. It was a mess, a whiteout, a slippery blizzaster. I’m one of those drivers that is really questionable to be on the road anyway…but in conditions like that, well.

‘so also will the coming of the Son of Man be. Then two men will be in the field: one will be taken and the other left. Two women will be grinding at the mill: one will be taken and the other left.Watch therefore, for you do not know what hour your Lord is coming. But know this, that if the master of the house had known what hour the thief would come, he would have watched and not allowed his house to be broken into. Therefore you also be ready, for the Son of Man is coming at an hour you do not expect.’ Matthew 24:39b-42

Our lesson today comes not from the grocery patrons, but from the birds. 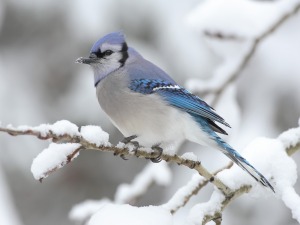