There is a smell coming from Nolan’s bookbag that I cannot identify.  I am scared to go in there and search.  I just keep reaching in for his bright yellow folder, which I can get without touching anything else.  Then I slip it back in…..and hope.  5 more school days…then it goes in the trash.

On our way to school the other day, Josiah picked up a slug and moved it (so it wouldn’t be stepped on) and wiped the slime on his shirt.  He had already changed once because of the  smeared syrup on the first set of clothes.  I took him to school with slug slime on his shirt.  It’s clear, though.  The slime.  Slug slime is clear.  I have that stored in my brain as an actual piece of useful information.

Today, when Zachary picked up a frog, he showed me the best way to hold it so as not to get peed on, and then he kissed it right on the mouth. 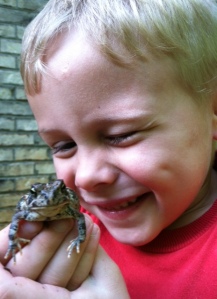 I am learning so much.

But a lot I already knew.  The Lord prepared me for this phase of my life by giving me brothers.  And my mom’s best friends growing up had mostly boys.  In school I had more friends that were boys than girls.

But I’m so prissy.  I like to be clean.   I don’t like sticky things, dirty things, or playing sports.  I don’t like action movies or violence or scary things or unrestrained adventure. (I finally just finished reading ‘The Hobbit’ to my boys, and I hated it.  Sorry.  I know that bothers people, but it wasn’t for me.  Endless peril and no love interest.  It was awful.)

When I found out I was having a boy with Nolan, the thought entered my mind ‘you may never  have a girl’.  I brushed it aside and thought nothing more about it.  In fact, I laughed.  ‘Very funny, God. I already have no sister, so no way would You not give me a daughter.’

When I found out Zachary was a boy, I wasn’t surprised.   I grieved briefly over the realization that I would never attend ‘salon day’ at the American Girl doll store, and then I breathed a sigh of relief.

Really, I love boys.  My husband is a boy and he is the best person I know.  Boys are hilarious, unpretentious, practical, and don’t need very many shoes.  Almost every problem they present can be remedied with food.  Last week Josiah couldn’t find a particular lego so I gave him a buttermilk biscuit.  I didn’t hear another word about the lego.  Problem. Solved.

Don’t hear me wrong.  I am not a fan of current pop culture which capitalizes on reducing the complex male counterpart of our species to simpletons, the way women have always been.  Now, in sitcoms, women are smart and men are stupid.  Women solve everything, while men sit on the sidelines looking perplexed.  The shift towards gender equality in this country is warranted.  But the pendulum has shifted so far that it seems ‘girl power’ trumps all.  There are many heroines, and few heroes.  More women are entering college now than men. I appreciate the advancements, I really do. I enjoy the liberties afforded by those attainments.

But I am trying to raise courageous, courteous, generous, responsible, respectable, honorable, noble men, who will love honor and respect their wives and choose Christ no matter what the world throws at them.  We are constantly searching for opportunities where our boys can be mentored by men of that caliber. They have an amazing father who fits that description.  And we are grateful for coaches, camp counselors, and church leaders who take their mentoring roles seriously.

So today, I am raising my glass (well my coffee mug) to ‘boy power’.  Here’s to ‘snakes, snails, and puppy dog tails.’  Here’s to roughhousing, and action, and high-risk adventure. Here’s to monster trucks, turbo engines, and racing.  Here’s to football, wrestling, and UFC.  Here’s to fighting and farting, boogers and BMX.  Here’s to running, jumping, climbing, and eating.  Here’s to nobility, honor, courage, fortitude and bravery.  Here’s to the stuff men are made of.

And here’s to Tom, Jonathan, Jeremy, Michael, Nolan, Josiah, and Zachary who have helped me become the woman I am.

Let’s hear it for the boys! 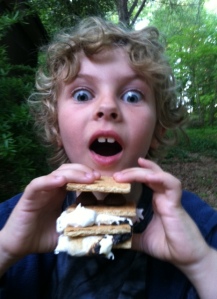 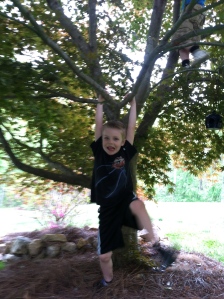